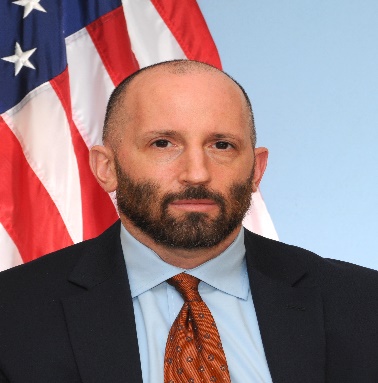 Alan W. Reiner received a bachelor’s degree in accounting in 1997 and a law degree in 2002. Mr. Reiner previously worked as an accountant and served as a law clerk for a trial judge. Mr. Reiner entered on duty as a Special Agent (SA) of the FBI on October 19, 2003.
From 2004 to 2010, Mr. Reiner was assigned to the Chicago Division, where he worked Public Corruption and International Terrorism investigations. In 2010, Mr. Reiner transferred to the Buffalo Division, where he worked domestic and international terrorism investigations. From 2012 – 2014, Mr. Reiner was assigned an International Terrorism supervisor in the FBI Headquarters Counterterrorism Division (CTD).
From 2014 – 2021, Mr. Reiner served as a Supervisory Special Agent in New Haven, Connecticut. Mr. Reiner served as a supervisor over squads investigating Violent Crimes/Gangs, Domestic Terrorism/Weapons of Mass Destruction, and International Terrorism.
Mr. Reiner has previously worked overseas for the FBI in Djibouti, Ethiopia, Mali, and Afghanistan.
Mr. Reiner reported to Brussels, Belgium as the FBI Legal Attache in June, 2022.