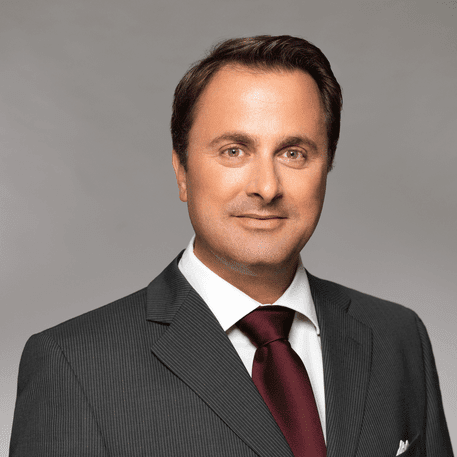 Xavier Bettel was born on 3 March 1973 in Luxembourg City.

Following secondary school studies, Xavier Bettel pursued higher education studies at the University of Nancy, where he was awarded a master’s degree in public and European law from the Faculty of Law, followed by a DEA (post-graduate diploma of advanced studies) in political sciences and public law.

Following the legislative elections of 20 October 2013, Xavier Bettel was appointed Prime Minister, Minister of State, Minister for Communications and Media, Minister for Religious Affairs on 4 December 2013 in the coalition government formed by the Democratic Party (DP), the Luxembourg Socialist Workers’ Party (LSAP) and the Green Party (“déi gréng”).

A member of the DP since 1989, Xavier Bettel was elected to Parliament for the first time in 1999 at the age of 26 while standing for the DP in the constituency of the Centre. He was re-elected in 2004, 2009 and 2013. In Parliament, he assumed among others the roles of vice-chairman of the Legal Affairs Committee from 2004 to 2013 and vice-chairman of the Committee of Enquiry into the State Intelligence Service from 2012 to 2013. From 2009 to 2011, he assumed the role of chairman of the DP parliamentary group.

At local level, Xavier Bettel initially served as a municipal councillor of the City of Luxembourg from 2000 to 2005, then as an alderman from 2005 to 2011. Following the municipal elections of 2011, he assumed the role of mayor, an office he held until his appointment as Prime Minister, Minister of State in December 2013.

Since January 2013, Xavier Bettel has been the chairman of the DP.